Why I’ve decided to downsize my system and Quit GTD

If you’re into productivity, I’ll just assume you know what is GTD. This time around I am going to tell you why you should quit GTD.  Numerous people worked out their lives around this methodology from perspective of outer game, rather than working on their inner mechanics. GTD is not the best route to go about it. When you start working on the superficial reasons of why you are not delivering the results, you end up frustrated and ultimately give up the system. Whatever that system might be. Be it working out, diet regimen, it doesn’t matter. Because tricks and systems are just a bandaid over the real productivity wound. 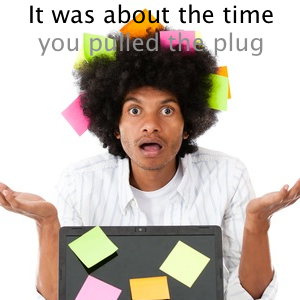 How other people feel about the Systems and GTD

This is what happens when you over-do it. When the mess of the system piles up, and instead of helping you, it starts to hurt you.

1. Why I quit GTD – This article talks about activity orientation, list building momentum, and guilt we feel about putting something off the list.

2. 26 reasons not to use GTD – Some of these points aren’t valid, but pointed me in some good directions and flaws of GTD.

3. BFD and GTD – When life starts getting complicated you can’t simplify by putting on more stuff, rather eliminating and doing only what’s important. Pure example of driving yourself crazy.

While GTD system does work for some people, the questions are are these people really more productive? Are they reaching goals in their lives faster than you do? Is the system really helping them get where they are headed? Reading GTD without a proper guidance from someone who can hold you accountable and explain you from where to start, will leave you confused, frustrated, and if you were tinkering your system long enough, it will leave you TIRED, without you getting any of your work done.

So Does GTD work?

Well, yes and no…

Having no System is better than a system that exhausts your time and energy. The system just seems like an easy way to allow yourself to procrastinate on the things that you really should be doing. And this is the problem that many newbies encounter. They get in touch with the book, think they’ve found a holy grail of productivity go out there, buy the agenda, buy the staplers, or go crazy and get a full suite of OmniFocus, only to have all of that stuff collecting the dust on their desk or hard drive.

This is actually part of the marketing ploy by David Allen and the company. They created something really robust, that nobody would use in real-world conditions, creating a “discipline” that will require you to get someone else to implement it for you, get the coaching and so on… And them being a “black belts” of the system and also a creator of it would be absolutely the best teachers. Don’t get fed with crap, pretty much. Use your own common sense.

Do you really want to get things done, or you want to acquire a hobby of organizing your life in “contexts”, Calendars, task management applications… Are you “doing” productivity, or are you being productive? Be honest with yourself.

So why do people fail when they try to implement any system?

Same reason why people quit numerous things in their life because they lack consistency. It’s the same example as the person who starts working out. He pays the premium gym membership, he starts lifting heavily every day, only to wake up sore tomorrow, and then he says THIS ISN’T GIVING ANY RESULTS!

You know what kind of people I am talking about. One of those that never gave enough of the efforts to figure out how things work, and try to push everything on motivation, and when the initial rush of positive emotions disappears, they just crash. But all of us acted like that at some point in our lives. It’s just the human in us!

But there is a fix for systems…

Based on my personal experience, and numerous friends and clients I’ve coached into living a more productive lifestyle, I’ve found that the solution to the problem is similar to the approach that I take in the gym.

The solution to this problem is called downsizing. An idea about downsizing came from minimalism. Why use things that you didn’t find the need for? Do we even need the system or we just need well-structured rituals that we perform throughout the day?

For those people who tackle hundreds of small tasks throughout a day, the system might be a must thing to have, otherwise, they would forget. Programmers take the best use of systems. And for them, I’ve downsized GTD and reprogrammed its purpose. It’s called CORE. And if you’re not facing the corporate drama, I don’t want you to read it. It’s simply not for you. You can do just fine by collecting your stuff in Evernote.

The system comes after…

…the big work. And the big work starts in your head. Your mental approach needs to change. David Allen blames people for this, saying that their system is either not: Current, Consistent or Contextually available.

From what I’ve seen is that the people have too much information on their plate, and they lack guidance on where to start. First of all, you and I are not David Allen, nor we don’t know literally anything about contexts and we’re far from being consistent. So how do we start implementing a system that requires consistency, if we have never practiced consistency in our lives before?

So we need to get back to the basics.

This leads us to the conclusion…

…GTD is not written for you and me. It’s written for “left brained” people who already posses a strong level of structure in their lives, and GTD adds them another layer of power and control in their decision-making process.

It’s going to be PERFECT, for people who are predominantly logical. I will give you the example of this. My friend Vukasin is a programmer, he’s very rational person. One of the smartest people I know. When I told him to use OmniFocus to run his tasks, he did all of that by himself, without even reading the GTD or following my advice. He divided his work projects, added project for “personal” and all of that flowed for him, right from the start. Programmers have inherent knowledge about systems. He developed his own in a matter of hours.

The system is in tune with his values of consistency, context, and emotions. But are you a super smart programmer? Are you neat and organized around the things you write down? I would consider myself lucky if you are consistently reading a task list somewhere on your computer.

So what’s my stance on GTD?

Ultimately I’ve adopted the main points of GTD, but I knew that GTD wasn’t enough. The system was working, but I was also “working the system”. It was easier for me to ran my task manager and process the inbox, do the review (it’s my favorite part), and ran everything around it than actually do my own work.

But there was still something missing. And the missing component was me. Now that I grew, and that I am “neck deep” into productivity, I’ve come to some pretty interesting personal revelations that have nothing to do with the systems. All of this breakthrough had everything to do with me, and me alone.

So the productivity starts and ends with YOU. Treating procrastination from the outside is same as treating cancer with aspirin. It simply doesn’t work. So what’s the simple solution?

And if I was starting all over…

… I wouldn’t be wasting 2 minutes on GTD. I would focus on the things that are proven to work. Instead of following an in-depth “system” that requires you to change yourself inside, but approaching it from the outside with various different techniques and methods, why not take the minimalistic approach?

So if you are a productivity beginner, this is the place where you should start:

Get rid of all the redundant stuff, and focus on these three things:

Get rid of all the redundancy when you are defining it. Strip your “CORE task” down to the bone. Once you know what it is, discovering wether you are acting with your goals or not is much easier. All you have to ask yourself: “Am I doing my money making activity, or am I fucking around?”.

Whatever happens in my life, I know that I did the majority of things that I’ve planned. See, once you know what is your daily task, there is no need for planning. All you need a recurring reminder, constantly reminding you what you need to do. Now, this list grew for me over time, so pretty much, my goal in making tasks, are a part of my daily routine. That is the secret sauce. The system that I am running in the background is taking care of all the marginal, less important things.

If I’ve lost my OmniFocus database, I wouldn’t break a sweat. It would make me forget things, that I most likely don’t need to do in the first place. Does this ultimately simplify your life? You know what needs to be done, and doing anything but your main thing is creating friction and redundancy.

In my case, it’s writing. I want to become the best writer in the world, and I’ve committed to writing and publishing DAILY. Everything else comes after that goal.

In the end, Source Code is a simple personal document reminding me of my most important values and their correlation to WHY I am doing, what I am doing. It keeps my world aligned and tilted in the direction that I’ve previously planned out.

When you connect with your mission and purpose in life on a personal level, your source code helps you keep in touch with the path that you’ve decided to take. My source code is usually followed with Dream-book, which is my ultimate guideline for whom I want to become, and where I want to arrive in the long run.

Ultimately the best productivity solutions are personal. There is always something that grinds our gears, and there is no one size fits all approach. That’s why my three steps are tailored towards you and revolve around YOUR OWN needs. Not the needs of the system, or the necessity to do something that is creating friction.

What do you think about the Systems? Do you think they are necessary, or they are an absolute must-have in today’s day and age? Your opinions welcomed in the comments!