What is actually a “Tipping Point”?

There are moments when the spread of the diseases reaches a tipping point, from that point on it is not a break out anymore, it is an epidemic. In this book Malcolm Gladwell isn’t covering the sickness epidemics, however he does cover the disease of the mind. The tipping point is not a “productivity” book per se as it has more relations to marketing than with anything else, but it gives a very fresh perspective with practical real life examples. 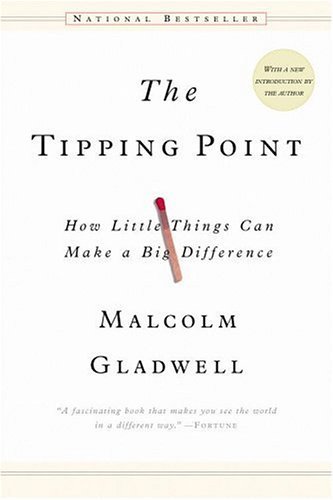 Who should read Tipping Point?

Major ideas found in the book

Personal strategies you can develop from this book

If you are a marketing professional, this book might increase your productivity, by giving you another lens through which you can observe your marketing efforts. While not all statements in this book are quantifiable and measurable due to the social nature of their cause, it gives a pretty solid insight into what we can achieve by communicating clearly and understanding the environment in which our ideas are spreading.

Commentary on the book

In the end, I’ve found that Tipping point conveys some interesting ideas and view points that might influence thinking about the spread of ideas in society, but at the end of the day it didn’t create a profound shift in my thinking.

However the book itself is pretty cheap on iBooks, hence it is worth the money invested, but it definitively isn’t a book that will keep you “glued” to your screen until you finish it. There are boring sections of it, that I had to force myself through.

You should Start reading every chapter, but if you wind falling asleep, don’t feel guilty skimming through to the next golden nugget. The fact that it has treshhold for being interesting makes it a longer read. Took me an entire month to finish it, and only because the initial concepts were so great that they kept me going in order to find more of those gems, as I skimmed through some portions that weren’t as engaging, or relevant to me.

The other major problem of the book is the fact that it lacks credibility on numerous fronts. While numerous ideas make sense, some ideas feel like they were “pulled out of the authors ass”, loosely speaking. While I do value and creativity imbued in the explanations, I am not quite certain that

On a scale of 1 to 5, this book would get 3.9. However ideas inside are worth checking it out.

Buy it on iBooks