iOS vs Web Development: Which Should You Choose?

From job availability and high base salary to flexibility and multiple opportunities to learn and grow while being appreciated for your work, web development offers so many benefits to those that choose to answer its call. On the other hand, the market for iOS app development has seen a constant surge in popularity. Currently, iPhone holds 47% smartphone market share in the United States. This has become a hot skill to acquire, especially from 2014 and the launch of the Swift programming language. Today, every iOS app developer enjoys large dividends from the high demand for smartphone applications. 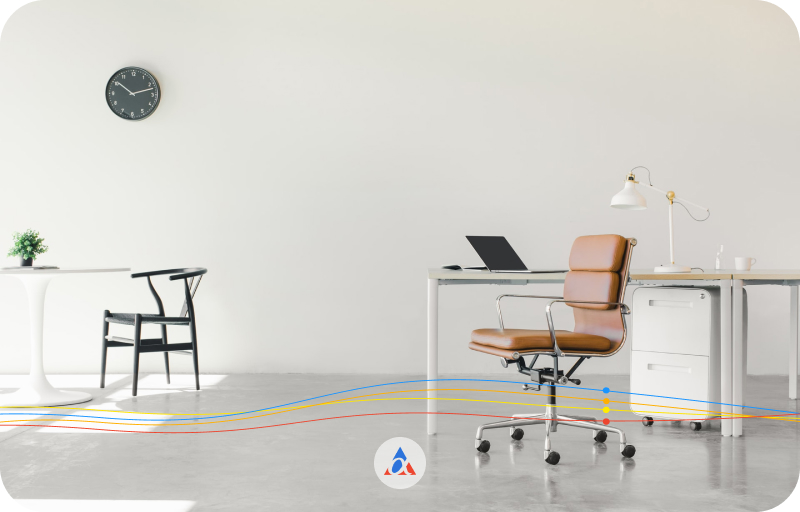 So, iOS vs web development, which path should you choose? Today, our web development agency in Chicago explores all the upsides of both professions and puts them side by side in an effort to help with your perplexion. We hope that this article inspires you to broaden your horizons and make the step in the right direction.

The development environment supporting Apple is a rapidly growing ecosystem, so it is no wonder that many established enterprises and tech startups focus solely on iOS app development. In fact, a large number of popular apps such as Snapchat and Clubhouse were initially developed for iOS users and later expanded to Android.

Also, many developers find Swift programming language somewhat easier and more user-friendly than Java, JavaScript, and Python. This could be the main reason why so many novice programmers are opting for iOS application development.

So, to kickstart our iOS vs web development comparison, let’s check some of the reasons why people choose iOS app development.

The consumers’ insatiable appetite for new apps gives iOS developers numerous opportunities to showcase their skills by creating innovative apps that run on iOS. Furthermore, the growing popularity of iPhones is expected to provide a steady demand for iOS developers.

Since the introduction of the Apple app store in 2008, around 1,500,000 jobs have been created around app design and development. Since then, iOS apps have seen an incredible increase in net worth and have collectively made $1.3 trillion globally in February 2021.

According to Joe Conway, Founder of Stable / Kernel and author of “iOS Programming: The Big Nerd Ranch Guide,” this large demand for iOS app developers is due to the fact that skilled professionals are crucial for maintaining as well as improving existing applications. Each time Apple releases a new device or new version of the iOS operating system, existing apps must be brought up to date so they would remain competitive with similar Android apps. He also predicts a shortage of professionals able to develop native iOS apps due to this high demand for new applications.

OS X and iOS developer Huo Ju stated on Quora that the demand for iOS professionals would only get higher with the growing number of iOS devices shipped as well as the number of startups aiming to develop their own iOS application. The two industries that are witnessing the highest demand for iOS developers are home automation and health.

With high demand for skilled iOS professionals comes a handsome salary. According to a popular job portal, Indeed, the average base salary for an iOS developer in the United States is $116,804 per year plus an annual cash bonus of $5,000. In fact, it is 68% higher than the average salary for other job postings.

After examining more than 259,000,000 profiles, LinkedIn stated that the job title of iOS developer occupies the top position. The graph below shows an overview of other iOS related job titles and their salaries. 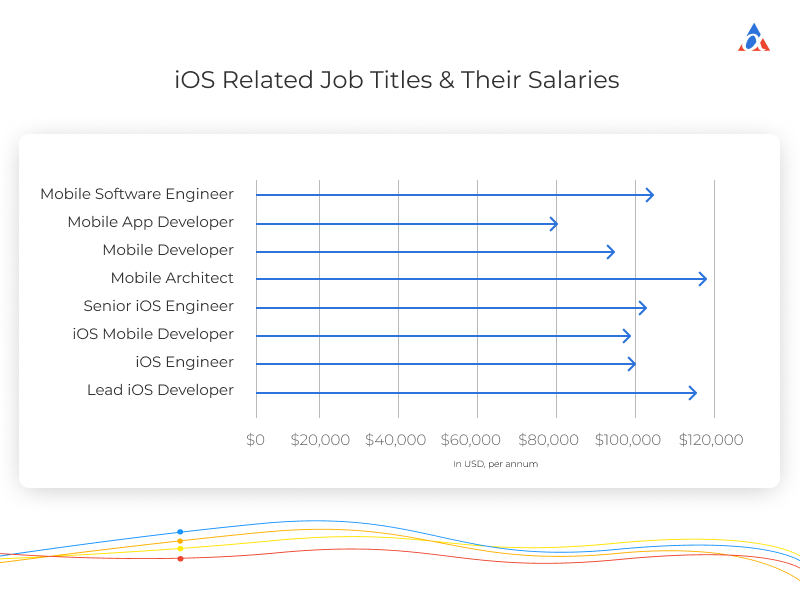 Swift is easy to learn

Swift is a modern, powerful and flexible programming language dedicated to all iOS platforms. It requires a developer to match various criteria before the app is ready for launch.

Swift has a short learning curve and the requirement to pass the app through various rules and regulations helps rookie developers with their job while at the same time preventing an app from going off track. The fact that Swift is easy to understand and implement allows developers to focus entirely on the project at hand.

Integrated Development Environment is one of the best tools for iOS app development, as it is highly stable and user-friendly. Xcode is another popular tool that developers have substantially used to develop, test, and launch apps. It is an all-in-one technology that comes bundled with almost every tool you’ll ever need to develop an iOS application.

Apple’s operating system is supported by millions of developers, both seasoned and newbies, as well as the company itself. This means that there is a large pool of people ready to help if you were to get stuck in any phase of app development.

WWDC, a week-long Apple event, also plays a major role in attracting new people and expanding the community. It is widely believed to be the most awaited event of the year in the Apple community, where developers, entrepreneurs, designers, and bloggers from all across the world get together to witness the launch of new hardware and software technologies.

What are the job responsibilities of an iOS developer?

Now that we’ve gone through all the benefits of being an iOS app developer, let’s continue our iOS vs web development comparison job responsibilities of an iOS developer and the skills required to become one.

Apple’s developers are required to create intuitive and eye-catching applications for devices powered by the iOS operating system. As part of a diverse team of managers, designers, and other iOS developers, they contribute to a brand image since poorly designed apps can damage the company’s reputation. Here are some responsibilities of an iOS developer:

Must-have skills for an iOS developer

According to Joe Conway, these are the skills essential if you wish to excel in your career as an iOS application developer:

Tools and programming languages you need to master

If you wish to provide a lucrative career in iOS app development, you need to equip yourself with advanced knowledge in the following:

Mastering web development is quite a challenging task. Even the most experienced programmers sometimes need help solving problems they are not familiar with. Coding is a constant learning process, and that is not something that should discourage you. Instead, you should see it as an opportunity to grow as a programmer since there will always be a new challenge for you to tackle.

The premium online experience is essential for the success of practically every business and organization. Companies that don’t employ a web developer must rely on lazy drag and drop web builders such as Squarespace. While these may do the trick for some businesses, websites created on these builders take forever to load and are generally unstable and challenging to maintain. This is why serious companies that care about their online image rely on a web developer or a team of developers to deliver unique, engaging, and well-designed experiences to their consumers. Furthermore, the Bureau of Labor Statistics estimates an 8% growth in the web development industry by 2029.

Although in web development, just like in any other industry, compensation is also based on experience, web developers get paid very well. Let’s take the state of Indiana as an example. According to Glassdoor, the average web developer in Indiana earns $65,553 per year with an additional cash compensation of $5,487. That is more than $30 an hour, significantly higher than Payscale’s report on an average hourly rate for Indiana, which is $17.04. Starting a career in web development is definitely a way to earn a high salary without necessarily having to earn an advanced degree.

A world of opportunities

Once they start their careers, web developers often have diverse opportunities open to them. Many of them don’t even stay in web development for their entire careers. Some find themselves attracted to web design and start employing mobile-first web design to create websites that work equally well on both desktop and handheld devices. Others find passion in developing apps. However your career evolves, web development skills can be your gateway to many other tech-related careers.

Next, you have countless opportunities for remote work. This means that you can broaden your job-seeking openings around the globe no matter where you live. You can choose to work part-time as a freelancer and later grow that work into your own business or join an established company. Also, the more programming languages you learn, the more job opportunities you’ll have.

The creative line of work

Web developers get to showcase their creativity on a daily basis. Front-end developers discuss web design requirements with UX experts and make different fonts, colors, and features come to life while back-end developers are immersed in the background components of an app or a website. Full-stack developers manage both the front-end appearance and back-end components.

A career in web development requires an understanding of design trends, user psychology, and business goals as it continuously sets creative challenges in front of those that choose it.

There is a common misconception that the only thing a developer needs to do is effectively create user interfaces. However, just like in any other industry, in order to create an efficient product, you need to communicate with your clients. Verbal and vocal communication skills are a must, but you may also need some basic teamwork lessons.

Regardless of the job description or official title, the one skill that all developers must possess is excellent problem-solving. There are many challenges a web developer tackles on a daily basis, whether it’s brainstorming how to best implement design ideas or figuring out how to make your code work with the backend code being implemented.

The following topics we’ll discuss in our iOS vs web development comparison are front-end and back-end skills required for a career in web development.

This concludes our iOS vs web development comparison. As you can see, the demand for both iOS and web developers is growing, and predictions are that it will further increase in the future. While iOS app development is more niche-oriented, mastering web development can be your gateway to a wide range of lucrative careers. Also, there is the matter of salary, which currently favors iOS skills. Be as it may, we hope you have enjoyed today’s article and that we have brought these two careers closer to you.
We’re well aware that in today’s world – codes run businesses. That being said, we strive to provide our clients with exceptional web apps but also provide a chance for many creative minds to gain valuable experience in the development field. In case you are interested in mastering either web or ios development, don’t hesitate to get in touch with us and start your journey.
If creativity is your trait, we are certain that learning how to code will give you a newfound appreciation of the work put into the technology that many take for granted.