What is Day One?

Day One is my go to journaling application. Instead of mindlessly tweeting throughout the day I use this simple app to take notes on what’s going in my life privately. I used to run my diary in Evernote, but it all got messy, because I didn’t have a reliable way of retrieving information, I couldn’t know what happened when… And Evernote was simply to much clunky for the calm reading environment. It took me a while to import all the 250 diary entries from Evernote, into the Day One, because I didn’t know any other way to do it. But in the end of the day it was worth it! 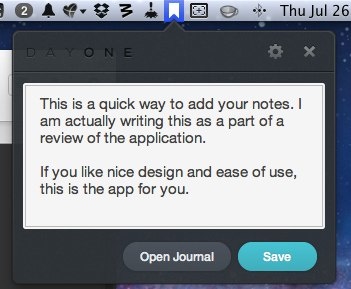 The main two reasons why I am using this instead of Evernote is it’s design and calendar. These two alone are making it a perfect journaling app. Simple, yet awesome. Some might argue that you don’t have photo support, to be honest I want my memories contained in the simplest way possible. Kept in such a way, that when I export them I can easily get them back in a .txt format.

There is only one thing that I don’t like, lack of Evernote support. Somehow over the time Eveernote became my backup storage, where I store all my Facebook photos, updates, Tweets, Instagram, Read Later articles. Unified search of everything that goes trough my system. Evernote support would be pretty much a must have, but I believe developer will include it in the future, because I will whine to him a lot to get this implemented 🙂

The app is minimal and full-featured at the same time. You have five windows: New, Days, Calendar, Starred, and Reminders. Simple design that does exactly that I want from it. About some technical things Day One has:

iOS version covers both, iPad and iPhone (iPod touch) and costs 1.99$. It tends to remind me of Twitter. It is supported by Launch Center Pro. Definitively worth your money. OS X Version usually costs 10$, but I believe they’ve lowered it to 4,99$. And in my humble opinion if you want a long term solution for your journaling needs, it’s very well worth the money. I like the fact that the developer promised a lot of new features.

Get Day One on The App Store