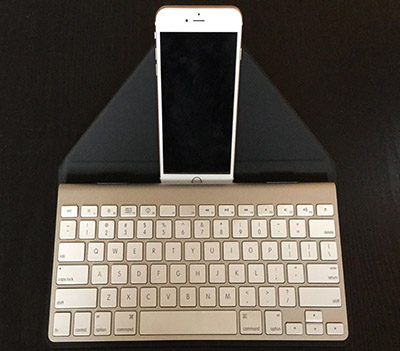 My Apple bluetooth wireless keyboard was laying around the house and collecting the dust without too much use on it. When I recieved it as a present, it was used as a part of my desktop docking station for my MacBook Air in clamshell mode, and it served its purpose admirably. However, ever since I moved to USA and started working from home, I didn’t have an in-depth home setup where I would get the best use out of it.

How Origami case turned my iPhone 6+ into a writing powerhouse

Then I’ve bought iPhone 6+ and I thought how the Origami case would be a great stand for iPhone 6+, so I ordered one from Amazon. But I was in for the surprise…

When it arrived I was kinda disappointed, as I didn’t anticipate that it was created for the iPad; I thought it was a generic stand. However I didn’t let that deter me and I put my iPhone horizontally on it and tried to use it. The problem I found was that in horizontal mode, part of the screen was hidden behind the keyboard.

I’ve found that if you really want to write in a horizontal mode, if you find something to support the iPhone you could get away with a reasonable writing experience. Not the best one, but good enough. Which in case of an iPhone 6+ is something you can hope for.

If you place your iPhone vertically, you won’t have any screen problems. This review has been written in this position. I was holding the keyboard in my lap, and it was behaving remarkably well. Therefore I’ve decided to keep it, despite my disappointment that it was origianlly designed for a different gadget. My iPad already has a logitech ultrathin keyboard attached to it, and having an origami for iPad feels a bit redundant.

The design of the origami, albeit not perfect,  is incredibly practical. When the case isn’t in use, it serves as a great protector of your keyboard. When you are ready, it is neatly expanded into a stand.

Origami offers you a mobile workstation and lets you put your Apple wireless keyboard to good use instead of collecting dust like mine! It also gives you a peace of mind when you carry around your Apple keyboard. And believe me, having a decent case for your Apple gadget is not that bad of a deal. My keyboard took quite the beating, so having a protective layer for it doesn’t sound like a bad idea.

This product has been designed for iPads up until the iPad 4, which means that they kinda overlooked the modern devices such as iPad Air (2) and iPhone 6+, which could utilize more out of this great stand. I also feel that its price is a little bit steep, like all Apple related products.

I am pretty happy with my purchase, and I feel happy that I can pack the case-protected keyboard on the days when I don’t know will I write or not, without having to lug around my iPad. Despite the lightweight factor, often I feel it’s pointless to carry arround my iPad when I am not certain that I will be using it. So in those instances Origami case is a perfect compromise. In fact, if it wasn’t for the home use, I believe I would keep my origami case, and keyboard within it, always in my car, so I know that I will be able to write without comrpomises.

Origami offers great added value, and it helped me get more out of my iPhone 6+. If you want to have a very agile mobile writing setup, this case will be a good companion to your mobile writing workflow.

My Answer To The Question: Why is your tech writing focused on Apple?
Next Post: Soylent Review: Why It Can’t Replace Regular Food And What To Do Instead