I’ve been through a lot of productivity books, ebooks, tutorials, and quite frankly, it’s boring me to tears to read those kinds of manuals.  Yes, information is useful, and yes if we play by the rules our outputs are gonna skyrocket.  But is that the only reward?  Where is the energy behind all that crude organization? 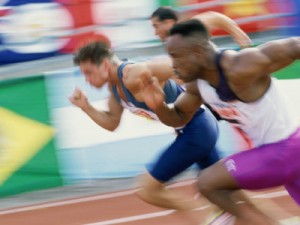 When people think about organizing they are thinking about something that’s dry.  It shows off in my writing that self organization can be pretty dry!  I can’t stress that word much, DRY!  I see myself passing through many phases of productivity workflow, to an extent where I created my own ecosystem.  I love it, it’s reliable, I’ve got all the information necessery in one single place and above all, it works for me!  All the parts are there, but I sturggled with ruthless execution of ACTIONS.  It’s different when you are completing your todo list, from completing it with a passion!

Taking action is not just a catch phrase, there is so much more behind it.  Like passion, realization of urgency regarding completion of your goals.  When you have goals in front of yourself, it’s your duty to bite, punch, kick and take blows, until those goals are achieved.  But instead of hitting blindly, what if we focused on Zen of achieving your big goals one small chunk of a time?

Being a productive person means constantly exposuring yourself to change.  We human beings love to keep status quo. For those of you who don’t know what status quo is, it’s a current state.  People like to keep their current state of affairs and don’t do any sudden moves in their current habits. They simply want to be, where they were before.  BE AFRAID OF STATUS QUO!

We don’t like change!  But we have to change if we want to progress. Because if we do the things, that we constantly do, we will get the results that we always get.  If you aren’t satisfied with your current state of affairs, you will have to put yourself through change of habits in order to change the position you are currently facing.  Every time I’ve invested massive energy in changing myself, it payed off.

The idea behind this simple strategy is to look inward for a solution, rather than outward.  My best example was when I wanted to change my physical appearance. I was in really poor shape, and it took a lot of hard work to change that, but after a year of investing into it, it payed off.

I introduced single habit that got me to where I am today, and it is being consistent with working out.  At certain point my progress slowed down and I’ve became lazy again, because I wasn’t serious about my decision to keep working on it.  It required more change and I wasn’t motivated enough to sacrifice more of myself for the mere fact of keep pushing forward.

So we are coming to realization that we can actually make a state of continual change, based on thoughts of positive outcome and maintain positive emotions, despite our massive change and discomfort it creates.  Now, back to my working out habits. I’ve been physically active for past 3 years.  I fall down, loose the flow, but there is something that keeps me getting back to it. It’s a golden habit, where I don’t need to force myself too hard to get back to it, BUT I lack motivation to endure.

This is my theory that only self motivation and good habits can create solid self discipline.  Self discipline doesn’t come from self torture and putting yourself through a lot of pain in order to gain a prize you’ve set out for yourself, hell no!  It’s coming from maintaining positive encouraging tone, with even more positive environment.

Change needs to start within you! So be the change you want to see!  Complete the first step in taxking action, and subscribe to my newsletter for more inspiring content!