Before We Start – Understanding the starting point

By reading this review you will have the personal impression of a long term iPhone user (since iPhone 4), and my perception of owning a new phone. You will be aware of the changes made in comparison to the previous versions of the phone, and weather or not you should upgrade.

As rumor mill told us what was coming way before the official launch date, my initial expectations of the iPhone were on pair with what we’ve known ahead of the time, hence not that great expectations. In the term of innovation This was the most underwhelming iPhone so far, as in so many ways, it is an exact same replica of the previous 2 generations of iPhone.

Perhaps the fact that it looks fairly similar to the old one, deceived me that it is practically same phone. However, during the course of this review you will learn what changed, and how merely after 14 days of owning it, I’ve changed my original opinion (this won’t be anything special) to contentment (hey, this is actually an upgrade).

Granted, before you move on, I’d like you to know that iPhone 6S+ was the phone I was extremely happy with, and I never had the expectation that I will be woo-ed by a new device. But let’s move on to the review itself, shall we? 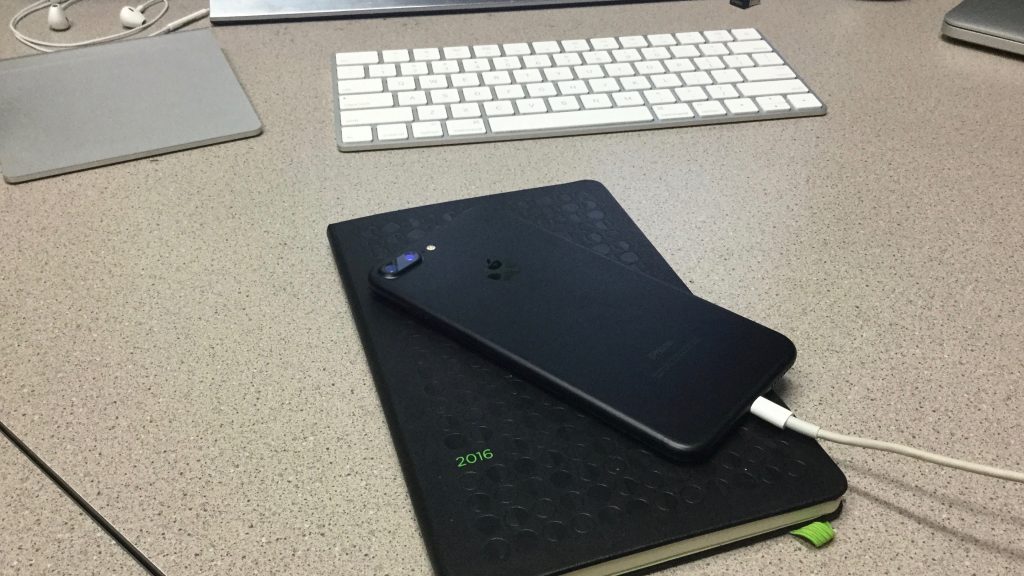 As far as visual experience of the phone, it looks very similar, almost identical to the old 6S+, however 2 completely new colors change the expression of the phone for the better. Black is a bit different now, and comes in two new variants, there is matte Black and Jet Black. I’ve took the Space Black, because Jet Black was completely sold out, I didn’t care for the color, and rumors of easily scratching it didn’t help the choice either. My primary focus was getting the black bazel. If you will put the protector on your jet black phone, how much point there is to get that particular color, if it will be hidden behind the case? The “standard” space black color also looking amazing, and looks different and better than old one on iPhone 6S+.

At first I thought I was rationalizing my purchase, but when I’ve got the case on, I truly realized how pointless choice of color is. There are numerous rumors out there that say that new Jet Black is easily scratched, thus requiring the case by default, and defeating the purpose of getting that particular color. The most interesting part is that in darker colors phone looks very professional. Previous space gray didn’t give this impression, thus this is a big leap forward in style.

The real differences are slightly noticeable:

Durability of the phone

This is not something that is usually covered in the review, but I feel as if it is fairly important to know. As I’ve been dropping the phone a lot, I’ve noticed it didn’t get nearly as many scratches as in previous iterations. The body is in near mint condition, and glass has some very minor scratches. Considering I don’t have any case on it, it is holding up admirably good.

The improvement image quality is noticeable, especially on scenic photos. The zoom is the thing that you will notice and use occasionally, and that can potentially be a very powerful tool in the skilled hands. I am not talking from the objective perspective, but rather from my first impression, and trying to emulate the behavior of the regular user. The photographer in me got a little bit disappointed. Perception of the images can’t improve as much as camera did, and that is due to display. However, in order to give these photos some true justice, you would have to compare them on big television screen, or on some monitor, as your iPhone screen is not that much different from the previous one.

Now when I started sending out photos, I’ve had people asked me what kind of filters did I apply, when I was in fact just sending a basic photo. That is how good these people looked like without edits. Not sure if people were noticing my superior photography skills, or wether they’ve experienced a placebo of their own, But people did like camera results a bit more than usually.

Beside the regular photography improvement, with iOS10.1 update came Portrait mode, that is still in beta, and not completely user friendly. It uses dual camera mode of the 7+ to produce pictures that have better depth and feel a little bit 3D-ish. If you are like me, and fancy yourself an amateur iPhone photographer, the new features are a nice candy, but won’t make a dramatic impact, it is still 12 Megapixels camera, with some neat fancy new features.

When it comes to low lighting, iPhone is still not up to the task. Some people claim that 7 is a radical improvement, however, it certainly isn’t leading the pack. Samsung and other phone manufacturers have low light image quality that dramatically surpasses the iPhone, and this is something where I was expecting a much bigger improvement.

For all the selfie queens out there, the front facing camera got a more noticable boost, and has 7 mega pixels now. Considering the amount of photos some people take with it, it was only expected.

If you put the screen to the maximum brightness it will feel like you’ve used flashlight straight into your eyes. The fact that screen is illuminating better under the same conditions means that our batteries may perform a little bit better. According to the specs, they claim that luminosity is 25% better, and I can confirm that it feels like it, if not more. Other than that, it’s the same old iPhone screen that you’ve had in your 6s+.

I miss the jack, as I am used to using headphones and the charger at the same time. But on the other hand, in one month from now I will be buying the Air Pods, and hopefully I won’t return them. Really hoping hard that that chip will do the magic that Apple promises.

However, in the interim, I can say that lack of jack makes this phone a little defunct. The new headphones that work with Apple proprietary format remind me that world is still okay, and that it’s fine. But I can’t say that I like it, or appreciate it.

I found myself on occasions where I wanted to connect my phone to an external speaker at the friends house, and I didn’t have the crappy extension on me. It would get me furious, because I couldn’t access the library. This will change in time, when we get more wireless accessible speakers and better cross platform integrations, but this is not that time. Removal of the headphone jack is a huge disappointment.

Furthermore I’ve experienced issues with the proprietary port when I am making phone calls. I encounter an issue that person talking to me can’t hear me. I have to plug the headphones out in order to restart the microphone, and plug it back in. As a regular user of the microphone, I am severely irritated by this, due to the fact that there was absolutely no need to abolish the jack that worked perfectly fine, for something that is yet to work flawlessly. Additionally, we are still waiting for the release of Air Pods, while I am dying here with the cables.

I’ve pushed for iOS10 as soon as the OS came out, so I had a full week with iPhone 6S+ on iOS10, before I got the 7. This made me adjust to the new OS on an old device. And when I moved over to the 7, I believe I had relevant experience to make a differentiation between 6S+ and 7+. If I was to tell you how much faster it feels I would put the percentage mark more than 10% and less than 15%. A marginal improvement in the day . The one extra gig of RAM does prevent the phone from coughing up in some rare instances.

The kinks of the iOS 10 haven’t been really cleared out completely. I believe that once we reach 10.2 version, phone should be working flawlessly, however, considering that these are still early months of the new operating system, phone works fine, but I would say that it is less stable than iPhone 6S+ on the iOS9.3 I’ve encountered an ocassional springboard automatic restart, which implies that memory management processes aren’t brought to a level of perfection. But I won’t be too hard on it, the overall impression of iOS10 is pretty decent, and I believe majority of the users will be happy. My application/dashboard setup is memory heavy, and it could have been the reason why my phone was crashing.

Closing Thoughts: Should You Buy/Upgrade?

When reading a review, I assume that people want to know whether they should buy the phone or not? My honest review of this device is that this is not a complete iPhone upgrade that we’ve expected. It seems more like S Version of the update, and the fact remains that it is not that much different than iPhone 6+ that came out two years ago. Therefore I have a feeling that technology in this device isn’t that much of an improvement, and doesn’t feel like a future proof device that you would be happy with for next two years.

Even if you are one of the people that like having “latest and greatest”, you wouldn’t be quite impressed with the new device, if you already have iPhone 6S+. If you have anything older than the previously mentioned phone, you would see dramatic improvements. The main reason why I’ve upgraded when I didn’t necessarily feel the need to, is because I am on Apple Upgrade plan, and it practically didn’t cost me anything to do so. If I didn’t have the Apple upgrade program, this is the first time in years that I’d skip upgrading…

iPhone 7 is a new phone, but it is an incremental improvement of an already great device. If you are on an old iPhone, and need an upgrade, I am sure you will enjoy it. If you don’t have an upgrade plan with Apple, or contract isn’t up, maybe you will want to wait for the next one, if you can hold on to it. This is one of the rare times where I will say that upgrading an iPhone is not a big deal anymore. Hopefully next year, I won’t have the same opinion.