I’ve been staring into the abyss for a while. Poised on the edge of what seemed an immense chasm: The Grand Canyon of dreams. But would I leap? 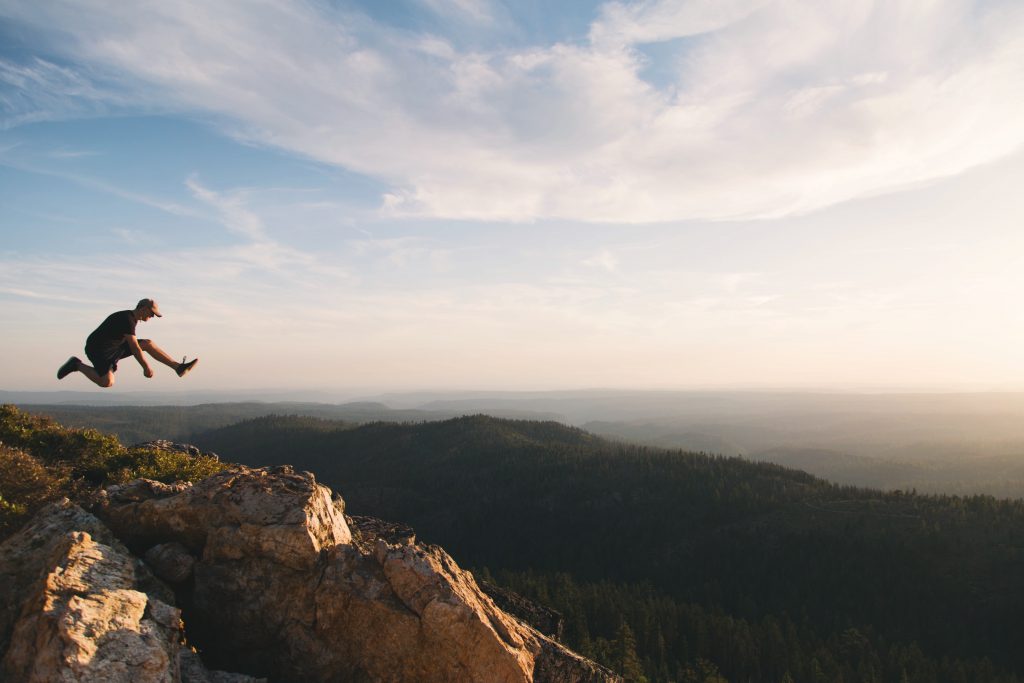 Maybe that’s a bit hyperbolic but I’ve been chewing over a big career move for a while now and for a variety of reasons the timing was never quite right to make the leap. All that changed on May 21st. That was the day I stepped out of my comfort zone – a 10-year long career track in project management – and stepped out of my current disciplines into a role I had no experience of doing.

What prompted this? It’s something that I’ve written about before; a number of discussions with my line manager and mentor about the direction in which my career was moving, my ambitions and how to maximize my options for future opportunities. I found myself faced with a “one biscuit or two biscuit” conundrum -whether to take a short-term, but certain, reward in my current field (one biscuit) or strike out into the unknown where my success was far from guaranteed, but the rewards were potentially greater in the longer term (two biscuits).

Like any big decisions, it felt daunting to be stood at a fork in the road and not have absolute certainty about the best path to take. In my younger days I had a personal mantra – the route that feels the most difficult is the best one to take – but in truth that philosophy now feels to me a little naive and cavalier. I’ve pushed myself beyond my reasonable limits on a number of occasions and I know now that attacking absolutely every challenge to see if you can do it isn’t always the best choice, particularly if you put your finances, health or personal relationships on the line in order to do it.

it felt daunting to be stood at a fork in the road and not have absolute certainty about the best path to take.

We all want to make the best possible decisions. So how can you step forward with confidence down a particular path? The first step I always take is the current state assessment. This is an honest appraisal of the current situation: How happy am I? What am I getting out of my current situation? This may sound redundant but it’s surprising how much additional thought and emotion can come to the surface if you devote time to thinking specifically along these lines. In my case, I realized that although I was happy with where I’d got to, and particularly enjoyed the team relationships I’d built, that I was no longer feeling stretched or excited by the role. This, in turn, led me to think about what “stretch” and “excitement” would look like, and I came to the conclusion that simply doing a “bigger” job probably wouldn’t fit the bill.

Part of the purpose of the Current State Assessment is to challenge or confirm the status quo. I’m happy where I am is a perfectly valid response; what’s important is to establish whether you’re likely to embrace a change or resist it. This may, in turn, influence your decision to take the left fork, the right one or perhaps simply to stand still.

Equally important as the current state assessment, the future state assessment requires that you take the time to get really clear about where you want to be. It requires the consideration of many variables: what it means to you to be successful; what makes you happy; what you’ll compromise on and what’s non-negotiable. It’s important at the moment of a big decision to have as much clarity as possible on your desired destination; You may not know for sure if your chosen path will take you there, but as Lewis Carroll said:

“If you don’t know where you’re going, any road will take you there”

When I thought about my future state I realized that it’s important to me to have options. I wanted to be someone with breadth, with a credible track record of working in more than one functional discipline within Financial Services. Most importantly, I wanted to stretch. I saw in my “two biscuits” option a longer-term prospect for progression and achievement that I simply couldn’t visualize in the one-biscuit choice.

It’s important to note that a future state assessment isn’t the same thing as a 10-year plan. As long as I’ve lived I’ve never been able to plan more than a few years ahead. My long-term visions aren’t specific, tangible goals; they’re foggy concepts of how I’d like to feel in the future and the way I’d like to have lived my life. When you’re at a crucial decision point you don’t need to have your whole life laid out before you – what’s important is that you’ve given careful thought to where you want the next few steps to take you.

When you’re at a crucial decision point you don’t need to have your whole life laid out before you – what’s important is that you’ve given careful thought to where you want the next few steps to take you.

Having considered both current and future states, all that’s left to do is to join the dots together and see how you feel about the result. “Gut feel” may be a cliche but if you’ve thought about where you are and where you want to be then there’s a pretty good chance your gut will churn like you’re on a choppy sea ride or flip somersaults like the excitement of a first date depending on the choices at hand. The thought process involved in dissecting your current position and the desired state puts a little structure around this experience, qualifying your gut a little with some considered thought.

At this stage, you’ll have gathered some thoughts, considered the journey and you’ll have a gut feel for the right option. This is the perfect time to find a trusted confidante or mentor to run it all past. It’s amazing how just saying some of these things out loud, and trying to sell your preferred option to somebody else, can bring things into sharp perspective and draw out the gaps in your thinking so far. If you’re lucky, your confidante will ask questions that make you challenge some of the fundamental aspects of why you’re leaning in a particular direction; At worst they’ll provide a dumb mirror that will simply reflect your own thoughts back at you. Even those who unwisely attempt to make your decision for you (mental note: choose a different confidante next time) are unlikely to send you down a path you don’t wish to pursue.

I actually ran my options past a number of trusted people. Bojan of course – because he tells me exactly what he thinks – a few trusted colleagues and ex-colleagues and of course my wife. I even ran it past a few people on app.net and each time I talked it through it helped me strengthen and clarify my thoughts.

I went through a protracted and careful decision-making process. In many ways, I was lucky to have the luxury of time, though it could easily have become a “someday never” situation. When eventually the opportunity coincided with my decision to pursue it, I was ready to leap forward with confidence. Confidence that I was doing the right thing; Confidence that whatever happened next I made the best choice possible.

In the weeks that followed, I found myself in a new environment, with new stakeholders to deal with and a new language to learn. I was in foreign territory and for the first time in a long while I needed to get up to speed from a position of almost zero knowledge. It was frightening; it was exhilarating; it demanded immense concentration and effort. But throughout the process I was never once distracted by those niggling feelings of self-doubt – I had absolute conviction that I was in the right place, doing the right thing. By going through this process of confident decision-making, I had freed myself from looking back and give myself the ability to focus entirely on the road ahead.

Six weeks on, I’m feeling great about my decision. The short-term rewards are abundant in increased satisfaction, new ideas, a renewed focus and a new set of skills. Even the longer-term objectives of future success feel clear and tangible to me.

I considered my options, took my time to reach a decision and then leaped. Would you have done the same?

Raise Your Game With Better Self-Talk
Next Post: Are You Ready to be Changed by Technology?